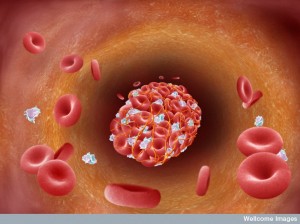 The Epstein Barr Virus is known to cause a drop in the level of platelets responsible for blood clotting – AllAfrica.com (1)

The Epstein Barr Virus (EBV) is one of several viruses that can harm the body’s ability to stop bleeding.

Dr. Joseph Kamugisha wrote that “Viruses such as chickenpox, mumps, rubella, Epstein-Barr virus, or parvovirus can decrease the platelet count (1).”

Blood, which does not clot is called Thrombocytopenia.

“When blood has lower than normal number of platelets, it is known as thrombocytopenia.

The platelets are made in the bone marrow as other blood cells. They circulate in blood vessel searching for damaged vascular components to be repaired.” (1)

“Individuals with low level of platelets tend to suffer prolonged bleeding. However, bleeding can occur inside the body (internal bleeding), underneath the skin, and from the surface of the skin (external bleeding).” (1)

A study published in 2004 in the German medical journal Wiener Klinische Wochenschrift said that EBV can cause abnormal blood system behavior. “EBV infection usually causes hematological abnormalities, mainly atypical lymphocytosis, which is a feature of infectious mononucleosis, and … decreases in platelet counts (2).”

Another study said that when treating Thrombocytopenia, doctors usually use corticosteroids as the first choice of drugs, “but they are controversial in … acute infections (3).”

EBV is a herpes virus known for its oncogenic (cancer causing) role, as well as for the common viral “kissing” disease (infectious mononucleosis). It is increasingly being associated with a diverse number of diseases. Thus, more research into products, natural or otherwise, that can help the immune system target the latent form of the virus is needed.