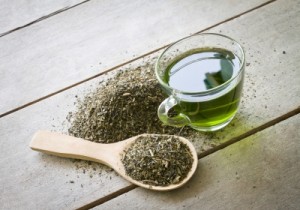 A study published in 2012 in the journal Biochimica et Biophysica acta suggests that green tea polyphenols may have a significant anti HPV effect.

The authors of the study state that “polyphenols have been found to be promising agents toward cervical cancer. In addition to acting as antioxidants, polyphenols display a wide variety of biological function including induction of apoptosis, growth arrest, inhibition of DNA synthesis and modulation of signal transduction pathways. They can interfere with each stage of carcinogenesis initiation, promotion and progression to prevent cancer development.” (1)

Apoptosis is programmed cell death, which means the tea polyphenols make harmful HPV-positive cervical cancer cells destroy themselves before they become a tumor.

Green and black tea polyphenols have also been shown to have anti-proliferative effects against the HPV virus that leads to cervical cancer. Another study found that “the effects of green and black tea polyphenols (GTP and BTP), on cellular proliferation and cell death in the SiHa cells(human cervical cancer) expressing the human papilloma virus (HPV)-16 … showed anti-proliferative effect.” (2)

This comes as good news for many women, as the Center for Disease Control and Prevention (CDC) estimates that “the overall HPV prevalence was 26.8% … among US females aged 14 to 59 years.” (3)

It is interesting that “by acting at specific steps of viral transformation cascade, polyphenols have been demonstrated to selectively inhibit tumor cell growth and may be a promising therapeutic tool for treatment of cervical cancer.” (1)